Travelling Towards a Quantum Internet at Light Speed 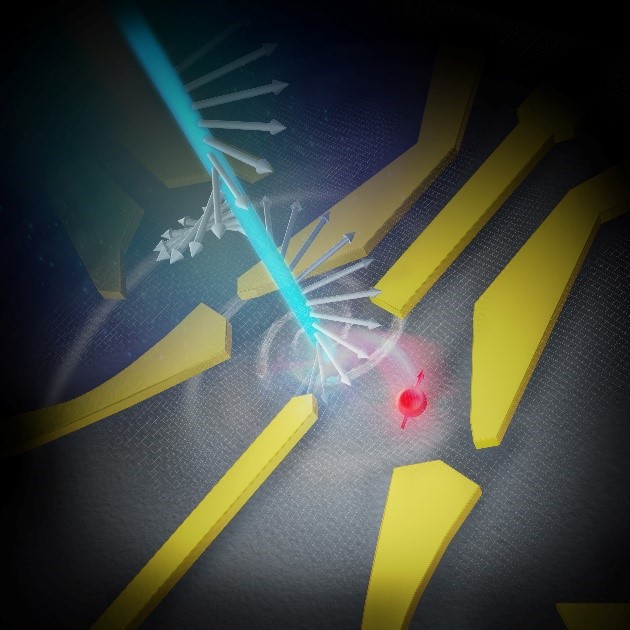 Figure. Schematic image of the spin detection of a circularly polarized photon exciting an electron spin. The yellow nano-fabricated metal electrodes form the pockets required to trap the electrons, move them, and sense them.

A research team lead by Osaka University demonstrated how information encoded in the circular polarization of a laser beam can be translated into the spin state of an electron in a quantum dot, each being a quantum bit and a quantum computer candidate. The achievement represents a major step towards a “quantum internet,” in which future computers can rapidly and securely send and receive quantum information.

Quantum computers have the potential to vastly outperform current systems because they work in a fundamentally different way. Instead of processing discrete ones and zeros, quantum information, whether stored in electron spins or transmitted by laser photons, can be in a superposition of multiple states simultaneously. Moreover, the states of two or more objects can become entangled, so that the status of one cannot be completely described without this other. Handling entangled states allow quantum computers to evaluate many possibilities simultaneously, as well as transmit information from place to place immune from eavesdropping.

However, these entangled states can be very fragile, lasting only microseconds before losing coherence. To realize the goal of a quantum internet, over which coherent light signals can relay quantum information, these signals must be able to interact with electron spins inside distant computers.

Researchers led by Osaka University used laser light to send quantum information to a quantum dot by altering the spin state of a single electron trapped there. While electrons don’t spin in the usual sense, they do have angular momentum, which can be flipped when absorbing circularly polarized laser light.

“Importantly, this action allowed us to read the state of the electron after applying the laser light to confirm that it was in the correct spin state,” says first author Takafumi Fujita. “Our readout method used the Pauli exclusion principle, which prohibits two electrons from occupying the exact same state. On the tiny quantum dot, there is only enough space for the electron to pass the so-called Pauli spin blockade if it has the correct spin.”

Quantum information transfer has already been used for cryptographic purposes. “The transfer of superposition states or entangled states allows for completely secure quantum key distribution,” senior author Akira Oiwa says. “This is because any attempt to intercept the signal automatically destroys the superposition, making it impossible to listen in without being detected.”

The rapid optical manipulation of individual spins is a promising method for producing a quantum nano-scale general computing platform. An exciting possibility is that future computers may be able to leverage this method for many other applications, including optimization and chemical simulations.

The work is published in Nature Communications as “Angular momentum transfer from photon polarization to an electron spin in a gate-deﬁned quantum dot.” (DOI: https://doi.org/10.1038/s41467-019-10939-x)