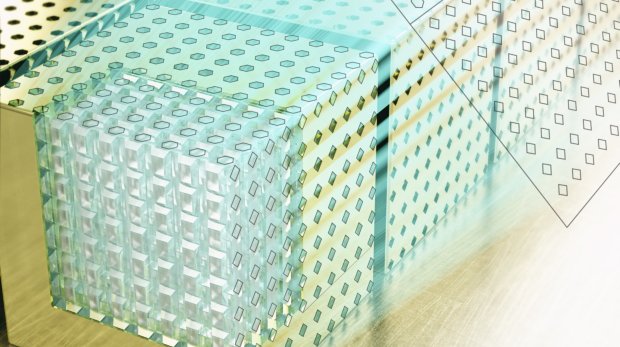 Scientists at the University of Twente's MESA+ research institute have developed a new manufacturing method to create three-dimensional nanostructures. This revolutionary method enables large-scale production of photonic crystals that can capture light. The discovery also makes it possible to produce chips with additional functions for mobile devices, computers and other applications. The researchers’ findings was published today in Nanotechnology, the leading journal of the British Institute of Physics.

The conventional method for manufacturing 3D nanostructures consists of stacking layers on a silicon chip. The first step is to write (or define) a pattern in the photoresist, using a mask and UV light. The etching or deposition of material in the layer then provides the desired shape. Dozens of layers are stacked to produce the chips themselves. This is a laborious process with limitations. There are restrictions on the number of layers that can be stacked, since layers that are relatively far apart can become randomly displaced with respect to one another, interfering with the chip’s functionality.

The new method makes it possible to define a 3D nanostructure on a chip in a single process. Researchers from the University of Twente’s MESA+ institute have developed a special 3D mask that can define the structure on two sides of the wafer simultaneously. This ensures that both sides of the chip are neatly aligned, thereby guaranteeing the vertical alignment of the final three-dimensional nanostructure.

The method opens the way for the mass production of chips in which various functionalities are positioned close together. In collaboration with ASML and TNO, the researchers are investigating ways of implementing this new technology in practice. There are possible applications in the medical world, for example by combining an optical sensor for proteins with a data processing chip and a magnetic memory. “Our method makes it possible to combine an endless variety of features on a chip, such as electronics, optics, magnets and microfluidics,” explains Professor Willem Vos of the Complex Photonic Systems group (COPS) at MESA+.

The researchers Diana Grishina, Cock Harteveld, and Willem Vos of COPS and Léon Woldering of Transducer Science and Technology (TST) at MESA+ discovered the method while working to develop new types of photonic crystals. They have succeeded in trapping light in crystals with embedded cavities and to control the direction in which the light travels. The research was financially supported by FOM.