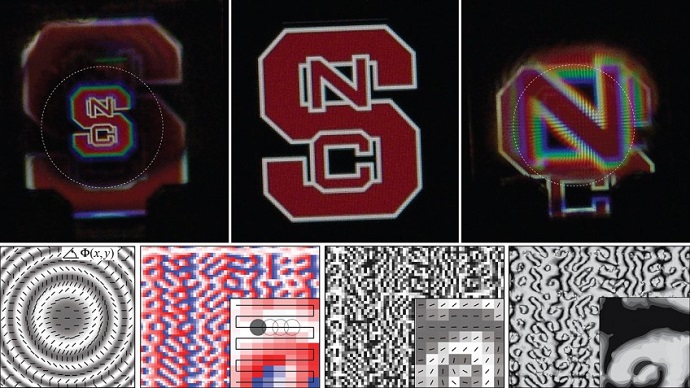 Top Row: Three images of the NC State logo as viewed through a geometric phase hologram, in this case a lens, where each corresponds to one of the three possible wavefronts. Bottom Row: Illustrations, simulation, and microscope picture showing the liquid crystal orientation created by the light patterning techniques reported in the paper, showing a lens profile (left image) and a far-field hologram profile (right three images).

“We can direct light into any one or more of those three wavefronts, which allows us to use a single ideal geometric phase hologram in many different ways,” says Michael Escuti, a professor of electrical and computer engineering at NC State and corresponding author of a paper on the work.

Previously, researchers were only able to make ideal geometric phase holograms in a limited set of simple patterns, curtailing their usefulness for new applications. This is because making these holograms involves orienting molecules or structures at a scale smaller than the wavelength of light.

“We’ve come up with two ways of making ideal geometric phase holograms that are relatively simple but allow us to control the orientation of the molecules that ultimately manipulate the light,” Escuti says.

First, the researchers use lasers to create a high-fidelity light pattern, either by taking advantage of how waves of light interfere with each other, or by using a tightly focused laser to scan through a pattern – much like a laser printer.

A photoreactive substrate records the light pattern, with each molecule in the substrate orienting itself depending on the polarization of the light it was exposed to. To understand this, think of a beam of light as a wavy string, traveling from left to right. That string is also vibrating up and down – creating wiggles are that are perpendicular to the direction the string is traveling. Controlling the orientation angle of the light’s linear polarization just means controlling the direction that the wave is wiggling.

The pattern that is recorded on the substrate then serves as a template for a liquid crystal layer that forms the finished hologram.

“Using these techniques, we’re able to create ideal geometric phase holograms in nearly any pattern,” Escuti says. “Theoretically, there are patterns that are too small for us to make, but we’ve been able to make patterns for every practical application we’ve addressed so far – from astronomical instruments to art installations.

“This work gave us a great deal of insight into controlling the spatial properties of light waves,” Escuti says. “We’re now exploring how we can better manipulate the spectrum of light waves. For example, we’re determining how we can handle visible light and infrared light differently within a single hologram.”

Escuti is also working with his company, ImagineOptix Corporation, to develop new applications and improve existing technologies that may benefit from higher efficiency thin-films.

The work was done with support from the National Science Foundation, under grant number ECCS-0955127, and from ImagineOptix.

Abstract: Throughout optics and photonics, phase is normally controlled via an optical path difference. Although much less common, an alternative means for phase control exists: a geometric phase (GP) shift occurring when a light wave is transformed through one parameter space, e.g., polarization, in such a way as to create a change in a second parameter, e.g., phase. In thin films and surfaces where only the GP varies spatially—which may be called GP holograms (GPHs)—the phase profile of nearly any (physical or virtual) object can in principle be embodied as an inhomogeneous anisotropy manifesting exceptional diffraction and polarization behavior. Pure GP elements have had poor efficiency and utility up to now, except in isolated cases, due to the lack of fabrication techniques producing elements with an arbitrary spatially varying GP shift at visible and near-infrared wavelengths. Here, we describe two methods to create high-fidelity GPHs, one interferometric and another direct-write, capable of recording the wavefront of nearly any physical or virtual object. We employ photoaligned liquid crystals to record the patterns as an inhomogeneous optical axis profile in thin films with a few μm thickness. We report on eight representative examples, including a GP lens with F/2.3 (at 633 nm) and 99% diffraction efficiency across visible wavelengths, and several GP vortex phase plates with excellent modal purity and remarkably small central defect size (e.g., 0.7 and 7 μm for topological charges of 1 and 8, respectively). We also report on a GP Fourier hologram, a fan-out grid with dozens of far-field spots, and an elaborate phase profile, which showed excellent fidelity and very low leakage wave transmittance and haze. Together, these techniques are the first practical bases for arbitrary GPHs with essentially no loss, high phase gradients (~rad/μm), novel polarization functionality, and broadband behavior.