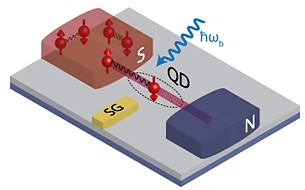 Transport process of electrons from a superconductor (S) through a quantum dot (QD) into a metal with normal conductivity (N). (Illustration: University of Basel, Department of Physics)

Scientists from the Swiss Nanoscience Institute and the Department of Physics at the University of Basel have demonstrated for the first time how electrons are transported from a superconductor through a quantum dot into a metal with normal conductivity. This transport process through a quantum dot had already been calculated theoretically in the nineties, but scientists at the University of Basel have now succeeded in proving the theory with measurements. They report on their findings in the scientific journal “Physical Review Letters”.

Transport properties such as electrical conductivity play an important role in technical applications of new materials and electronic components. Completely new phenomena occur, for example, when you combine a superconductor and nanometer-sized structures, known as quantum dots, in a component.

Researchers at the University of Basel working under Professor Christian Schönenberger have now constructed such a quantum dot between a superconductor and a metal with normal conductivity to study electron transport between the two components.

It should in fact be impossible to transport electrons from the superconductor through a quantum dot at low energies. Firstly, electrons never occur on an individual basis in a superconductor but rather always in two's or in so-called Cooper pairs, which can only be separated by relatively large amounts of energy. Secondly, the quantum dot is so small that only one particle is transported at a time due to the repulsive force between electrons.

In the past, however, scientists have repeatedly observed that a current nonetheless runs between the superconductor and the metal – in other words, electron transport does occur through the quantum dot.

First evidence of the transport mechanism through a quantum dot

On the basis of quantum mechanics, theories were developed in the nineties which indicated that the transport of Cooper pairs through a quantum dot is entirely possible under certain conditions. The prerequisite is that the second electron follows the first very quickly, namely within the time roughly stipulated by Heisenberg's uncertainty principle.

The scientists at the University of Basel have now been able to accurately measure this phenomenon. In their experiments the scientists found the exact same discrete resonances that had been calculated theoretically. In addition, the team including doctoral student Jörg Gramich and his supervisor Dr. Andreas Baumgartner was able to provide evidence that the process also works when energy is emitted into the environment or absorbed from it.

“Our results contribute to a better understanding of the transport properties of superconducting electronic nanostructures, which are of great interest for quantum technology applications”, says Dr. Andreas Baumgartner.