Who stole all the stars? 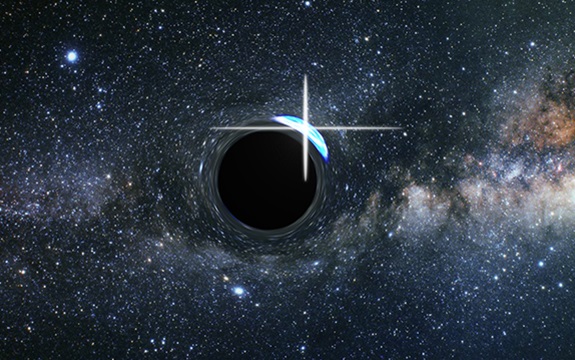 Artist's impression of a flare from a star partly behind a black hole. Credit: James Josephides, Swinburne University of Technology.

Investigating the millions of missing stars from the centres – or cores – of two big galaxies, astronomers at Swinburne University of Technology say they may have solved this cosmic whodunit, and the main culprits are not the usual suspects.

While the scientists confirm that one of the depleted cores is the largest ever detected, they report that it may not have formed in the manner previously thought.

In normal sized galaxies, the density of stars increases smoothly as you move towards their centre.  However, for decades astronomers have observed a star shortage in the centres of many big galaxies.

“The smaller of the two galaxies that we examined – the one with the smaller depleted core – likely formed from the collision of two similar galaxies, each seeded with a massive black hole several billion times the mass of our Sun,” says lead-author Dr Paolo Bonfini, now at the Universidad Nacional Autónoma de México.

“In this well-studied process, the black holes migrate towards the centre of the newly-forged galaxy by ousting the stars already there, hurling them outward in a gravitational slingshot manoeuvre.  Pairs of massive black holes effectively work together and gang up on individual stars in a galaxy’s core.”

Co-author of the study, Swinburne’s Professor Alister Graham, says even less fortunate stars that venture too close to either black hole can be torn apart and swallowed.

“These cataclysmic events produce high-energy UV and X-ray flares as we briefly see into a star’s hot interior while it is shredded by the immense gravitational field around each black hole.  When the black holes themselves finally merge, a series of gravitational waves is also emitted,” says Professor Graham.

However, simulations have shown that if a galaxy collision involves a larger galaxy consuming a smaller satellite galaxy, then things can be different.

If the captured galaxy has a densely crowded centre of its own, then this tightly bound region can survive largely intact during the cannibalistic affair, with only the outer stars stripped off.

“The captured galaxies move towards the centre of the large galaxy in a braking process that pumps stars out of the core of the large galaxy,” says Professor Ben Moore, galaxy modeller and Director at the University of Zurich’s Center for Theoretical Astrophysics and Cosmology in Switzerland.

“Simulations have shown that they do this in such a way that a core of constant stellar density is created, around which the semi-digested satellites then hover.”

Unlike the smaller of the two galaxies studied by the scientists, the stars in the core of the bigger galaxy are uniform in their distribution and this galaxy also contains several dense knots of stars near the edge of its core.

One of these `knots’ is a whopping 45 billion times the mass of our Sun – nearly the entire stellar mass of our own Milky Way galaxy – and therefore capable of causing a lot of damage.

Furthermore, the larger galaxy’s giant core, discovered in 2012 by Marc Postman at the Space Telescope Science Institute in the USA, is unusual in that it is some ten times larger than those typically observed in other big galaxies.

“We suspect that this giant core primarily formed from captured satellite galaxies, rather than massive black holes,” Professor Graham says.  “Indeed, the culprits appear to have quite literally been caught in the act.”

The bigger galaxy, known as 2MASX J17222717+3207571, is 75 times more massive than the Milky Way, and it is the brightest amid a large cluster of galaxies in the direction of the Hercules Constellation.  The smaller galaxy with the smaller core, known as 2MASX J09194427+5622012, is about 30 times the mass of the Milky Way and is near the Ursa Major constellation.  Both galaxies are roughly 4 billion light years away.

This research helps to open a new window on the study of galaxy cores and the processes that shape the evolution of massive galaxies.  The future James Webb Space Telescope, expected to be launched in 2018, will enable astronomers to better image more galaxy cores and hopefully, reveal how often hapless satellite galaxies are consumed.

This research has been published in The Astrophysical Journal.