Can the origin of the first gravitational waves detected be traced back to primordial black holes?

New theory proposes scenario for the origin of the universe 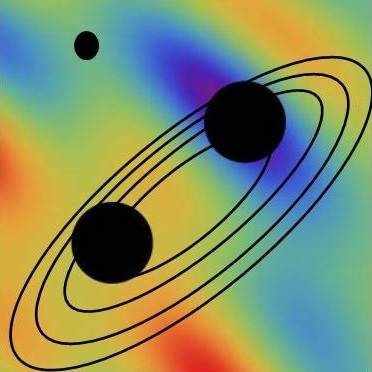 Illustration of black hole binary: Neighboring primordial black holes attract each other with gravitational force when they are sufficiently close to one another, eventually forming a binary star. The binary continuously emits gravitational waves and finally merges into a single black hole. © 2016 Teruaki Suyama.

A team of researchers from the University of Tokyo and their collaborators have put forward a novel scenario proposing that the binary black holes—a pair of black holes bound together by gravity and orbiting each other—discovered in September 2015 by the LIGO-Virgo collaboration, including the Laser Interferometer Gravitational-Wave Observatory (LIGO) gravitational wave detectors, are primordial black holes, which were formed soon after the Big Bang created the universe.

In tandem with its historic announcement on the first detection of gravitational waves, the LIGO-Virgo collaboration of U.S. and European scientists also reported that the gravitational waves were created by a merger of two massive black holes—the first such discovery—each weighing about 30 times the mass of the sun. After this discovery, many astrophysicists started wondering how such heavy black holes were created and how their binary system was formed.

The research team led by Assistant Professor Teruaki Suyama of the Research Center for the Early Universe, Graduate School of Science, the University of Tokyo built its study on the premise that primordial black holes, which were formed just after the Big Bang, were distributed randomly in space. The researchers then calculated the incidence of black hole mergers in the present epoch. They found that based on the hypothesis that primordial black holes constitute about one-thousandth of all dark matter in the universe, their estimated event rate of black hole mergers closely matches the frequency of mergers returned using LIGO-Virgo’s observational data. When a sufficient amount of empirical data related to black hole binaries have been collected, it will become possible to test this primordial black hole scenario, thereby further promoting our understanding of black holes and the early universe.

“Since the research topic was timely with [LIGO’s] detection of gravitational waves, we quickly wrote the paper completing it within two weeks” says Suyama. He continues, “We expect that the proposed scenario will be tested in the future when much more observational data has been collected.”

This study was published in Physical Review Letters online on August, 2, 2016, and also selected as an Editors’ Suggestion by the journal for its important and interesting research result.